Since our last review, political news has been dominating the domestic agenda. Boris Johnson was appointed as Prime Minister and shortly afterwards expelled a number of Conservative MP’s for not following the party line. Parliament was then prorogued. That was considered unlawful by the Supreme Court, so the MP’s from all sides are back squabbling in the Commons.

As I write, Prime Minister Johnson is submitting his proposal for a “deal” to the European Union (EU). There are indications that there will be sufficient rebel Labour MP’s, along with the DUP (who support the proposals) and the expelled Tories to get this through Parliament. All of this, of course, relies on the EU and, in particular the Irish Taoiseach, agreeing to the revised proposals. This is by no means certain.

Whilst political tensions have been high UK equity markets, as can be seen from the graph below, have ended the period as they started, despite a mid-period fall of around 5%. The same can be said for property investments, albeit without the volatility. Gilts, a typical safe-haven asset, have seen large gains as investors have moved away from risk assets. The yield you will now get for investing in a government bond for 10 years is now less than 0.5% per annum. Only if we consider that in Germany you actually pay 0.5% a year to lend the government money for 10 years (Yes, you read that right), can we even consider contemplating that such a course of action is sensible in any way. If rates do eventually rise, even slightly, Gilt investors will be hit very hard. We can see no sensible rationale to expect gilts to contribute to portfolio performance over the longer term.

UK equities are now particularly unloved, and undervalued, when compared to other equity markets. Whilst it is not hard to see why, we do feel that this offers the opportunity for a longer-term investor.

Global markets have also tracked sideways over the period, albeit with small gains in some areas predominantly due to the weakness in Sterling, rather than any meaningful gain in the market itself. President Trump is seeking re-election in the US next year. This is undoubtedly the most important market in the world and, in election years, it is usually the case that the president seeking re-election will do all they can to support markets to aid that re-election. I would imagine that this will be something President Trump will do his best to influence, given that he has always pointed to rises in the stock market as a measure of success throughout his presidency. 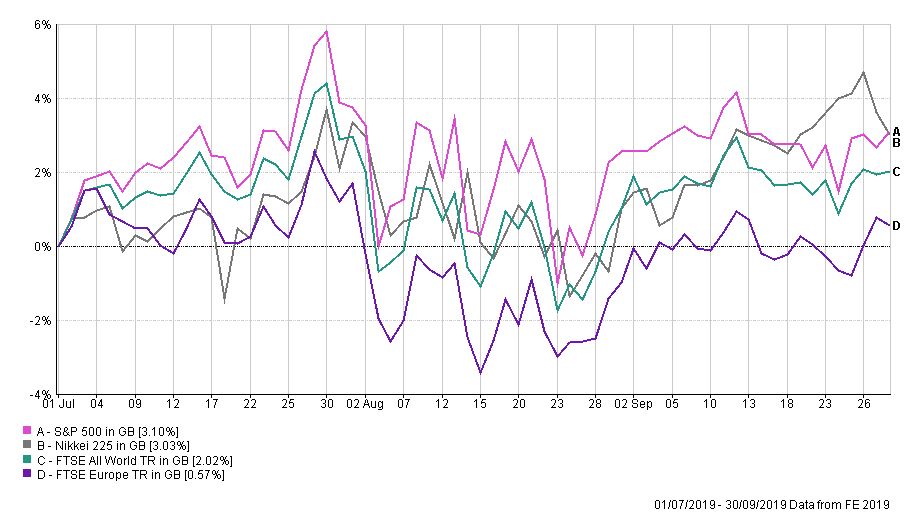 The coming months will undoubtedly see a lot of volatility, particularly in the UK, as the govenment seeks to address the BREXIT issue. Wherever your loyalties are in this respect, I am sure everyone would agree that a return to a domestic agenda for the government will be welcome once this is finally resolved one way or another.

We need to keep an eye on indicators that may signal a global recession. After all we have had 10 years of sustained recovery, but as this has been a much shallower recovery than usual, there is the possibility that it could continue for longer than expected.

It is most definitely an interesting time for investors. We will keep you up to date with our quarterly review on this website.